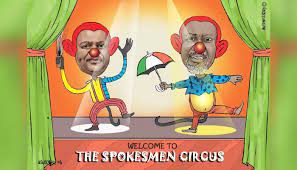 Senator Remi Tinubu trended for a few days on Twitter a few weeks ago because of an old video shot around the 2019 general election where she comments about Igbos who live in Lagos along the lines of: “If you are not for us, if you prove difficult, as much as we love you, you will be chased out.” As can be expected for a platform known for wrath and witty takes, the commentary was scathing.

Now, whether Senator Tinubu’s comments were made in jest or not as is being claimed, the history between Igbos and Yorubas, particularly as it relates to politics and elections, makes the timing of the re-release of the video, on the eve of another election, suspicious. It does not help that her comments follow a pattern.

On the eve of the 2015 elections, the Oba of Lagos threatened, in colorful language, a group of Eze Ndigbos who paid him a courtesy visit: If they did not support the APC gubernatorial candidate Ambode, then they were going against the Crown and would end up in the Lagoon.

The comments were controversial when made and widely condemned and both would probably be much more circumspect in their choice of words today. Who benefits then, from fanning grievances between Igbo and Yoruba, especially when no group can win elections on their own without collaborating with others?

There are already fears that the 2023 presidential elections are going to deepen our ethnic divisions, considering that the three major candidates, of the All Progressives Congress (APC), Labour Party and Peoples Democratic Party (PDP) (going by social media energy and news coverage), represent the largest ethnic groups in Nigeria.

Peter Obi cannot win without the support of millions of voters across the country including from and in the South West but portraying him as the Igbo candidate is designed to trigger age-old narratives.

Likewise, remarks like Senator Tinubu’s reinforce anecdotes about how the Igbo are ill-treated – particularly in Lagos, evoking stories from the civil war about property appropriation as well as recent stories of election disruptions in predominantly Igbo neighborhoods.

These will make it harder for Tinubu to appeal to Igbos or indeed to other Nigerians, especially since his candidacy is wrapped up with Yoruba nationalist rhetoric about it being his turn and the turn of the Yoruba.

And the narrative Fulani supremacy is bubbling – the underlying subtext to Wike’s populist crusade for justice – safe in the knowledge that not even Buhari, with his famed 12 million votes, could win the presidency of Nigeria with only the votes of his base.

We suffer from ethnic-based politics in Nigeria, carefully planted by the British and watered from the rivalry between Obafemi Awolowo and Nnamdi Azikiwe. In addition to all the wonderful things he was responsible for including championing free basic education, Awolowo is credited with being the progenitor of ethnic politics in Nigeria.

The cracks began in 1941 with the Nigerian Youth Movement and then become full-blown 10 years later, when Azikiwe’s National Council of Nigeria and the Cameroons (NCNC) was “poised to win a majority in the western regional parliament and thrust Azikiwe into the premiership of the western region.”

Through a combination of tribal mobilisation and other inducements, Awolowo used his party, the Action Group, to stage a political coup by getting NCNC loyalists to defect on the floor of the assembly.

Part of what did the ‘trick’ was Awolowo’s appeal to tribal solidarity, firm in his belief that the path to national harmony was through regional/ethnic representation. Unfortunately, Azikiwe, hurt, inadvertently buttressed Awolowo’s theory by running back to the eastern region and the rest is history.

Despite several attempts to collaborate starting with the post-1959 elections all the way to 1983 elections, they never successfully collaborated and it is the mistrust and betrayal between these two men that millions have carried over into our present-day politics.

Today, the cries of tribal solidarity continue and for the younger generation bearing the strange burden of too little and too much history; the best way to sway them is to scare them.

Over the years, to keep the embers of distrust glowing, we have come up with easy-to-remember, lazy, stereotypes about each other, keeping ourselves at arm’s length, unable to collaborate to push off the knees pressing on our necks while Uzodinma, El-Rufai, Fayemi, Wike, Makinde and Tambuwal love it up and plot for their futures in the APC, PDP or whatever party they will find their way to in the future.

We can expect more videos to be unearthed between now and election day and more stories to inflame ethnic solidarity – and while one cannot simply wave away personal experience and years of social conditioning, those of us, who must be in the majority, who desperately want something better for Nigeria must struggle with our fears, suspicions and set them aside in the knowledge that we have not been served by decades of division.

If the candidate we support wins – this candidate will be the president of all Nigeria, not part of Nigeria and we need their win, through legitimate elections, to be accepted and we need every president to be responsible for and accountable to all Nigerians, not just those who vote for them.

At least two things should happen as a fall out of the issues raised by Senator Tinubu’s video. One, that more of us take every opportunity to demand that presidential candidates share their plans to build social cohesion and ensure reparative justice.

This could be in the form of debates, town halls or even policy papers – not glib statements but details on best we can repair and preserve our trust in each other and our institutions.

Two, we can use this opportunity to revisit our past and discuss, analyse and tell the truth; the same way others have used the death of Queen Elizabeth II to excavate the horrors of colonialism.

We can revere and honour Azikiwe, Awolowo, Ahmadu Bello et al without following their insecurities – they left lasting wisdom for us in their books, writings and actions.

For instance, Zik’s views about the universal fraternity of mankind are useful today not only for Nigeria but for a world torn apart by the pandemic and the insatiable greed of corporates and states and Awo’s insistence on universal education and universal healthcare should be a call to action to shape the focus of government at every level.

And considering the widening inequality, Aminu Kano’s empathy for the talakawa, his humanism and campaign for education and equality of classes and people are needed even more than ever.

Let’s dig out these views and spread them everywhere – and give toxic ethnic solidarity a rest and a good place to start is with how we campaign and vote in the 2023 presidential elections.

Note to readers: historical references are from Chris Ngwodo’s ‘Fate of the Union’ – a must read for everyone.

Ayisha Osori, author of ‘Love Does Not Win Elections’, will be writing for BusinessDay for the Nigeria Decides 2023 series every fortnight on Wednesdays.