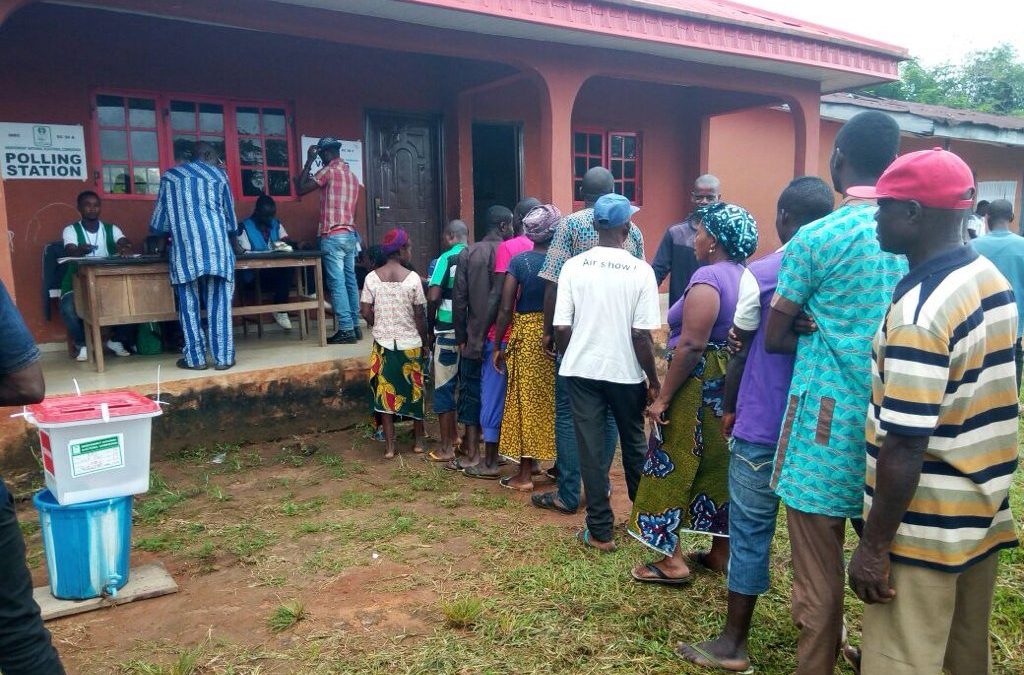 In Benin City after the rains, come the floods and then the traffic jams. On one such typical day, a policeman cocked his gun and aimed at the face of a bus driver who had cut in and scratched the side mirror of the car the policeman was in. The bus driver yelled,  ‘you can kill me – but you cannot take my soul’. This is the spirit that the people of Edo need to dig into as they head to the polls on July 14 2012. What should be uppermost in their minds is simple: a brighter future for the state and its citizens.

Benin City, the capital of Edo is home to 1,125,058 Nigerians, almost a third of the population of the entire state. It is small, bustling and lush and the vibrancy of the fauna is glorious: Technicolor in real life. Benin could be a beautiful city; instead, it looks like a city in the middle of reconstruction after a war or a severe economic recession or decades of neglect. There has been no war and although there is a global recession, Nigeria keeps pumping out hundreds of thousands of barrels of crude from which Edo gets a steady allocation, so it must be neglect – the neglect of government.  However, the people are largely are proud of their city and how much it has developed under the administration of Governor Oshiomhole. For them, Benin has come a long way from the days of Lucky Igbinedion’s PDP led government and yet the PDP, with no positive track record in this state, wants to claim Edo at all costs.

Why? This is the question the citizens of Edo must ask themselves as they prepare for elections on July 14 2012. They must ask this question not only of PDP but of the other parties as well – ANPP, CPC, Labour, SDMP, and NCP. Why do the candidates think they are good for Edo and why should they trust them?

Governor Oshiomhole has an unfair advantage because anything would be an improvement on Igbinedion. Being used to little from governors we would rate Oshiomhole high just for the work done on building and improving the road infrastructure and network. But he has a scored a few other praise worthy points.  First, Edo has increased its internally generated revenue (IGR) by 300% from N300 million a month to N1.2 billion. Why is this important? Because compared to its resource rich neighbours, Edo is poor and cannot rely solely on the monthly revenue allocation from the Federal Government for growth and development. Only Lagos State is generating enough IGR to say ‘to hell’ with an overbearing President, all states should ideally aspire to this. Second, Edo has started implementing measures for reducing waste in public expenditure. Notable amongst these reforms was the introduction of citizen’s identity cards based on biometric technology that will among many applications, be used to control waste in the payroll system. And third, Edo is the only other state, apart from Lagos to qualify for a concessional credit program from the World Bank  – in recognition of the reforms taking place there.

The biggest threat to Governor Oshiomhole’s re-election is Major General Charles Airhiavbere – not because he has done anything for or in Edo, but because he is the PDP candidate. Apart from having a bad governance track record in Edo, PDP only have money and might (intimidation via the 3,500 military personnel drafted to Edo ahead of the elections) in their favour and they are ready to deploy both…never mind that the money really belongs to all Nigerians and the might is an abuse of power. While self composed and reasonably articulate, Airhiavbere is short on ideas and is not convincing on why he would make a better governor than Oshiomhole.

If Nigerian elections were about issues not money and about change not might, then Chief Solomon Edebiri of the ANPP would be Oshiomhole’s biggest rival. He has ideas, passion and conviction but Nigeria is not quite there in terms of the quality of our democracy, so this rarely counts. However we need more people like him stepping forward to contest and improve the quality of those we have vying for and entering into office.

The other four candidates, Roland Izebuwa (CPC), Comrade Charles Igwemoh (Labour Party), Paul Orunmwense (NCP) and Frank Ukonga (SDMP) frankly do little but give the opposition a bad name. There is little known about their background, achievements or even interests and the AIT organized interviews and debate did not inspire confidence. If these are the best candidates these parties could come up with in Edo then something is wrong. In a state of over 3 million people, even after deducting the under aged and the elderly, surely there are 4 articulate men or women who have performed effectively. There really should be a fine for parties who field unelectable candidates.

Governor Oshiomhole is not perfect. There is a lot of validity in the criticisms leveled at him – the neglect of certain parts of Edo, the contract award process and the refusal to hold local government elections so that governance can get closer to the people. But anyone who wants to be objective will admit, based on his track record and the track record of those who are running, he deserves re-election. In an ideal world, it would be fairly easy to predict his win. But because we live in a flawed dysfunctional world where being bad pays (except for James Ibori and we live in hope that more will find their way to his situation), the results are uncertain even though the desires of the people are clear.

The privilege to govern has to be more than a party’s ego. We know PDP is a party of ‘do or die’ and while we wish feverishly that their ‘do’ was for good and that ‘die’ was for them giving their lives in service…this is not the case. People of Edo, decide properly and protect your decision – the rest of Nigeria is watching and wishing you well and by default wishing ourselves well for the next general elections.

And no, we will not forget that a PDP led Federal Government is presiding over the N2.8+Trillion fuel subsidy scam, $1.5B Malabu Oil deal, N32B police pension scam and $3.6M US Embassy money laundering operation, and the list keeps growing.]